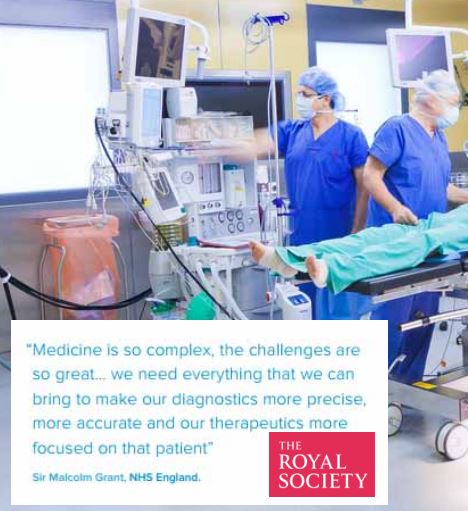 Machine Learning (see the differences  between AI/ML/DL) with the application to health informatics is extremely motivating for two main reasons:
1) Machine learning  (“the workhorse of AI”) is the fastest growing field in computer science today, and
2) Health is among the greatest application challenges.

However, learning machine learning, particularly for the application domain health, is not an easy task for two reasons:
1) Machine learning is so vast,
2) Health is so enormously complex.

The ROYAL SOCIETY has started in April 2017 an excellent awareness project, see:
https://royalsociety.org/topics-policy/projects/machine-learning

2) You can watch this introduction video on Youtube:
https://www.youtube.com/watch?v=lc2hvuh0FwQ

3) And you can make yourself familiar with the health informatics domain:
https://www.springer.com/de/book/9783319045276

Please always keep in mind: Machine learning for health informatics needs an integrative approach: algorithm development is at the core, however, 70% of the work is in data preprocessing, data mapping, data fusion; and at the end of the day you have a “customer”, which means that you have to visualize your results gained in arbitrarily high dimensional spaces into the lower dimension, which means  to map it from RN to R2 – which is a diffcult task.

There are many excellent textbooks in machine learning, but if I would be forced to give a maximum of three recommendations – I would take my three favourites:

The magical number three and my personal recommendation is to read it in this order:

Those three are my favourite textbooks (in German “Lieblingsbücher”), Nr. 3 is named “Deep Learning” but it shows impressively that deep learning is much more than only neural networks (in German “Depp Learning”), but with many facets, awesome and super interesting!

Here some more suggestions (I apologize for the incompleteness)

And here some suggestions to get an understanding of the complexity of the health informatics domain:

Function learning = understanding relationships between continuous variables, e.g. learning how hard to press the gas pedal for a certain acceleration of a car. There are two approaches: rule-based polynomials or power-law functions; and similarity-based theories which focus on the idea that humans learn by forming associations: if x is used to predict y, observations with similar x values should also have similar y values (refer to the work around Thomas L. GRIFFITHS, Psychology, Berkeley); in machine learning this is a hard task, see e.g. Auer, P., Long, P. M., Maass, W. & Woeginger, G. J. 1995. On the complexity of function learning. Machine Learning, 18, (2-3), 187-230, doi:10.1007/BF00993410.

Kernel function = defined as a real-valued function of two arguments,

Human kernel =  is a function which can also be provided by a human to the machine learning algorithm, thus: human kernel. Automatically, this is done by the Support Vector Machine (SVM), because under certain conditions a kernel can be represented by a dot product in a high-dimensional space (Mercer’s theorem).

Regression = predicting the value of a random variable y from a measurement x.